Green Tea VS Black Tea: Is It That Difficult To Pick The Side?

On a rainy day, sitting on the porch, sniffing through the invigorating petrichor, what would you love to sip through? Most probably a cup of hot tea! But the real question is, which one? It’s futile to mention that the world is divided over green tea and black tea. While with modernisation people started drifting toward green tea as a ‘status symbol’, passionate tea connoisseurs still swear by the mind-invigorating brews like the Assam Black tea, Darjeeling Black tea, Ceylon Black tea, Earl Gray and Irish Breakfast tea. Today, we are not here to reflect on their choices, instead, we are here to remove the burden of choice from the shoulders of those who are still divided between these two teas.

Green tea, produced from unoxidised leaves of Camellia sinensis, has always played a prominent role in traditional Indian and Chinese medicine owing to its antioxidant properties and beneficial polyphenols.

Here are some of its health benefits:

Something that we connect green tea to is weight loss. However, green tea directly does not result in fat loss. A medical publication has revealed that green tea contains catechins and caffeine, which can boost energy metabolism, thereby helping in weight loss.

One of the major components of green tea, epigallocatechin-3-gallate (EGCG), is proven to have anti-inflammatory properties. Researchers have also found that when applied topically, green tea induces relieves skin inflammation.

A study found that polyphenols found in plant-based diets can improve insulin resistance and oxidative stress. Since green tea is rich in beneficial polyphenols, it may help lower the risk of Type-2 diabetes.

There are two sides to a coin. Similarly, green tea, which comes with a lot of health benefits, comes with some risks too. A cup of green tea is said to have somewhere between 30-50 milligrams of caffeine, which can cause anxiety, stomach issues, sleep deprivation, and nausea. Also, consuming large amounts of green tea beverages or extracts alongside a stimulant drug may lead to an increase in blood pressure and heart palpitations.

Like green tea, black tea also comes from the same Camellia sinensis plant but in this case, the leaves undergo a lot of withering, drying, rolling and oxidation. This oxidation process not only gives this tea revitalizing aroma but also makes it nutritional by converting the catechins present in green tea into flavonols, thearubigins and theaflavins. 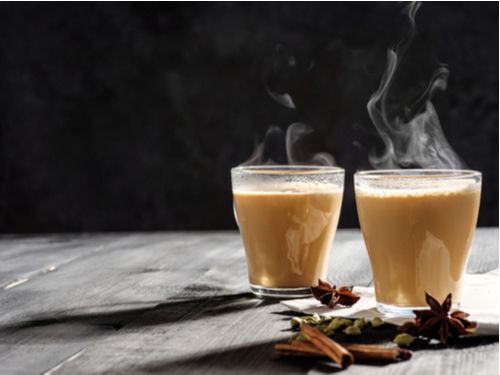 While many argue that both green and black tea come with equal health benefits, the oxidation process involved in manufacturing black tea may have a different impact on health.

A research report suggested that catechins in green tea and theaflavins in black tea can have an inverse effect on skin, breast, lung and prostate cancer. The report stated that consumption of black tea has displayed a decreased risk of skin squamous cell carcinoma (a type of skin cancer). It has also been found black tea can have a protective effect on non-smoking women from lung cancer. Consumption of black tea may also reduce the risk of colon cancer in both men and women.

A study conducted in Britain reported that people who consumed black tea were found to have greater mineral bone density. The same study also reported that women who drank at least 3 cups of tea a day showed a decreased risk of rheumatoid arthritis as compared to women who never drank tea.

The epigallocatechin-3-gallate (EGCG) present in black tea has been found to have a protective effect against neuronal diseases. Owing to this, the study found that people who consumed around 3 cups of tea every day had a reduced risk of Parkinson’s disease.

Like green tea, black tea also comes with some risk factors, when consumed above prescribed limits. Some elements like lead and aluminium present in black tea can actually become toxic if consumed in large quantities. Black tea also contains around 4% of caffeine, which in excess can lead to insomnia, stomach issues and anxiety. Research has also found that when one consumes black tea in large quantities, the tannins present in them slow down the body’s ability to absorb iron and that may further lead to anaemia.

All in all, both green and black tea come with their own set of health benefits and risk factors but what to choose to invigorate your senses, should better be left to you. If you ask for our opinion, we believe, you can consume both in moderate quantities to enjoy both of their health benefits. But if it is all about taste, you are the better judge.

Keep Yourself Safe During The Cough And Cold Season

It is common to get cold and flu during the transition of weather from autumn to winter. This article provides scientifically proven tips to keep away from cold and cough this season.

20 Things You Must Have In Your First-Aid Kit

Every house should have a first aid kit to handle emergencies. From antiseptic lotion to bandages, cotton rolls and disposable gloves, here are 20 items that you should have in your first aid kit.

Keep Yourself Safe During The Cough And Cold Season

It is common to get cold and flu during the transition of weather from autumn to winter. This article provides scientifically proven tips to keep away from cold and cough this season.

20 Things You Must Have In Your First-Aid Kit

Every house should have a first aid kit to handle emergencies. From antiseptic lotion to bandages, cotton rolls and disposable gloves, here are 20 items that you should have in your first aid kit.