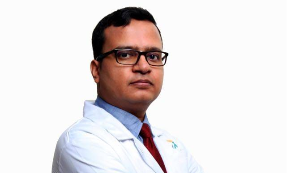 Dr. Amit Kumar Agarwal is a top orthopedician in Delhi-NCR with more than a decade of experience in the field. Currently, he works as a Senior Consultant - Orthopedics,  Joint Replacemnet & Arthroscopy with Apollo Indraprastha. His area of expertise includes joint replacement, arthroplasty, sports injury, and arthroscopic surgery. He had received various medals and distinctions during his stint as a medical student. He has been conferred the honorary adjunct title of  'Professor' in recognition of his contribution to research and Academics by Apollo Hospitals Educational & Research Foundation (2017).

One of the major accomplishments of the doctor is heading a team of three orthopaedic surgeons from Indraprastha Apollo Hospital, New Delhi for the Nepal rescue mission during the Nepal earthquake in 2015 and performing 80 orthopaedic surgeries in a short span of 4 days.

Dr. Amit has penned numerous publications in indexed and non-indexed journals on various orthopaedic subjects. He has also presented several academic lectures at various National & International conferences. The doctor is known for his friendly, caring, and sincere nature. In his free time, Dr. Amit loves to travel, watch movies, and relax.

1) Worked as Junior Resident at Post Graduate Institute of Medical Education and Research (PGIMER), Chandigarh from 1 July 2005 to 30 June 2008 in the department of Orthopaedics.

2) Worked as Senior Resident at Department of Orthopaedics, All India Institute of Medical Sciences (AIIMS), New Delhi, India from 20 Oct 2008 to 14 March 2011.

3) Worked as a Clinical fellow in the Department of Orthopedics at Sunderland Royal Hospital, NHS, UK from 4 April 2011 to 31 January 2012.

4) Worked as Assistant Professor in the department of orthopaedics at Santosh Medical College, Ghaziabad from 11th Feb 2012 to 15th October 12.

7) Working as a Consultant in the Department of Orthopaedics at Indraprastha Apollo Hospital, New Delhi since 1 September 2014 till now.

How can I take an appointment with Dr Amit Kumar Agarwal ?

What is the educational qualification of Dr Amit Kumar Agarwal ?

How can I consult with Dr. Amit Kumar Agarwal:

To enjoy services provided by Apollo 247 on Mobile, download our App